A Life in Exile

Words of Grace and Peace from a Fellow Pilgrim

Who knew that isolation could be so noisy? As the world increasingly moves toward acts of self-quarantine, isolation and social distancing, the electronic airwaves are taking up the space with noise.

Whether it’s a 24/7 news cycle, a continuous Facebook or Twitter feed, or radio and podcasts, it’s easy to keep silence at bay.

But what am I listening to? What affect is it having on my heart, mind and soul?

Be still, and know that I am God.*

I’m reminded of a man who also struggled during a time of crisis. His name was Elijah. He’d been a great prophet — used by God in demonstrations of power against the false prophets of Baal. But an evil woman sent him running in fear.

She dared to threaten the life of God’s man, and he took off running. He landed underneath a broom tree and told the Lord he’d had enough. “Take my life; I am no better than my ancestors.”*

Even Elijah recognized his own lack of faith in a crisis.

But God wasn’t done with him yet. He first made him get up and eat, not once by twice, because he was going to take a journey. He traveled for another forty days before God actually spoke to him. 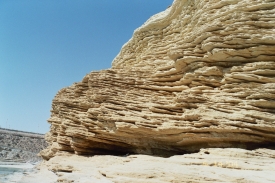 Apparently, those long days of travel didn’t help Elijah’s attitude, because he was still complaining to the Lord by the time he arrived at his destination — a cave in Mt. Horeb.

Thankfully, God listens, even to our complaints. Yet, it doesn’t mean we don’t need to listen to him.

That’s when God told him to get ready for a reply.

It came in a gentle whisper.

You know what the interesting thing was? God asked the same question of Elijah that he had before showing him all his power — “What are you doing here, Elijah?”* And Elijah gave the same answer, but now, maybe he was willing to listen.

God told his prophet that he wasn’t finished with him yet. There was still work to do, and he spelled it out. However, he also told him one more thing — you are not alone.

Yet I reserve seven thousand in Israel — all whose knees have not bowed down to Baal and all whose mouths have not kissed him.*

How are you handling this time of crisis in our world? Do you feel like your life is in danger, and God might as well take it now, because you’ve never been so scared, and you realize your faith is weak?

What are you doing here?

This site uses Akismet to reduce spam. Learn how your comment data is processed.