A Life in Exile

Words of Grace and Peace from a Fellow Pilgrim

I was asked to teach my Sunday School class this past week, and it was obvious the lesson would be centered around the Christmas narrative, but the title said so much more than just a simple Christmas story. The lessons have been about Answers to Tough Questions, and I should have known that I’d be asked to teach on such a topic.

A child of my father, who loved researching and teaching the Bible, I could not settle for just a straight, follow-the-book kind of lesson — I pulled out the big guns and spent several days in study and preparation.

What I found was a reaffirmation of the validity of my faith in Jesus Christ and a renewed awe of the uniqueness of Christ.

So, the short answer to the question is “yes,” but the longer answer comes in so many other ways: 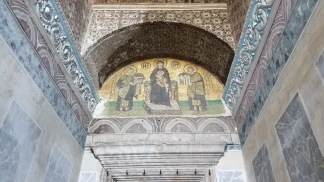 Found in Luke 1:26-35, we see that Christ’s birth is like no other, as he’s born of a virgin, born of the Holy Spirit, given a name which means “Yahweh saves”, proclaimed “great”, called “Son of the Most High” and rules a kingdom which will never end.

Know anyone else who has such an auspicious beginning?

Along with the record of his birth, we have prophecies which foretold his coming. Jesus also fulfilled 332 direct prophecies that were proclaimed hundreds of years before his birth by multiple writers or prophets, who had no direct connection with each other.

One man fulfilled all these prophecies!

When on trial before the Sanhedrin, as recorded in Mark 14, Jesus was asked a direct question: “Are you the Christ?” His answer — “I am.” This caused the hearers to tear their clothes and accuse him of blasphemy. Mark tells us it is because he made himself equal with God.

This is just one of many claims of Christ which caused his hearers to denounce him or try to kill him.

It was obvious from what he said and their reactions that he was claiming to be one with God.

Though the Ten Commandments made it clear that God alone should be worshiped, there are several passages which show us that Jesus did not refuse the worship of those around him. After he walked on the water, those in the boat worshiped him (Matthew 14:33). The man born blind worshiped Jesus after he was healed (John 9:38), and at the resurrection, the women fell at his feet and worshiped (Matthew 28:9).

Jesus did not stop people from worshiping him, because he was worthy of worship as God.

Indirect signs of his Deity

Throughout the gospels, we see that Jesus forgave sins, claimed to be life, claimed authority and preexistence. He even foretold his death, resurrection and return.

Could anyone do these things but God? No.

Words of others in the New Testament

The writings and letters of Paul, Peter, John, Mark and Luke all make multiple references to the deity of Christ and his equality with God.

There is no other religious leader who made such claims. Christ alone claimed to be God and is God.

Skeptics have been around since the beginning, but Jesus told them:

There are consequences for lack of faith in Christ as God and Savior.

Ask yourself: Does my belief system (even secularism is a belief) provide me with assurance of salvation, cleansing of sin, eternal life, hope, peace or purpose?

Jesus is the answer, because he is God. Choose him.

Visit Josh McDowell’s website or read Evidence that Demands a Verdict for more on this another other topics of faith.

This site uses Akismet to reduce spam. Learn how your comment data is processed.